Finally. After all this time and nearly two years, I will be travelling abroad and seeing a bigger picture. I am so excited and nervous - because my money is so limited. Hehehe. 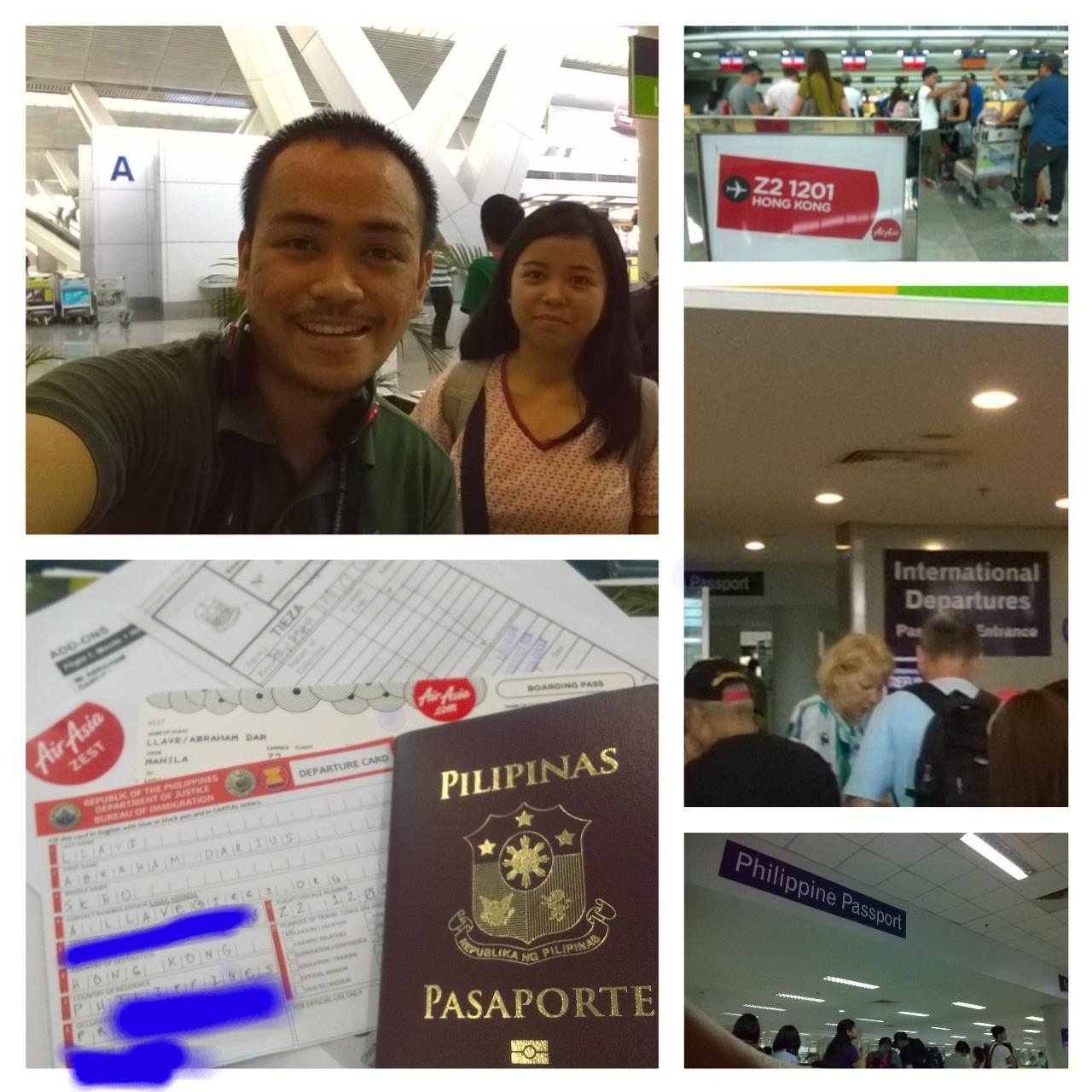 Woke up kinda late, around 0830H. Good Lord, as it's a holiday at least here in Laguna Province I therefore was magnetized by the bed. Cooking food for breakfast, took some time. My sister accompanied me to the airport: we rode a the regular DLTB Bus trip from Olivarez LB and since I still don't have Hong Kong Dollars, we got off at Makati-Dela Rosa, walked into the neighbouring malls like SM Hypermarket and Rustan's to find a money changer. Alas, the first didn't have any, while the latter don't have Hong Kong Dollars. After a lunch at Jollibee in Rustan's we proceeded to the airport via taxi, as it's the most convenient way and I'm kind of running out of time already. 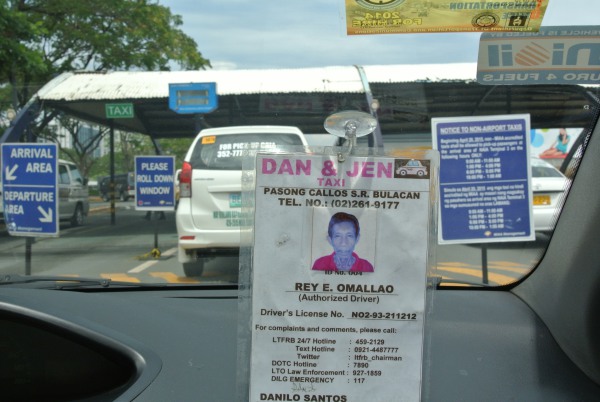 Our taxi driver on the way to the airport.

After a loong long time (since September 2013), I finally able to set foot again in the Ninoy Aquino International Airport Terminal 3. Checking in was a breeze!

I am almost late for the boarding time by around a minute or two that I was not able to enjoy exploring for the first time the international pre-departure area of the airport. Kek, it was also my first time to utilise walkators in  my life. 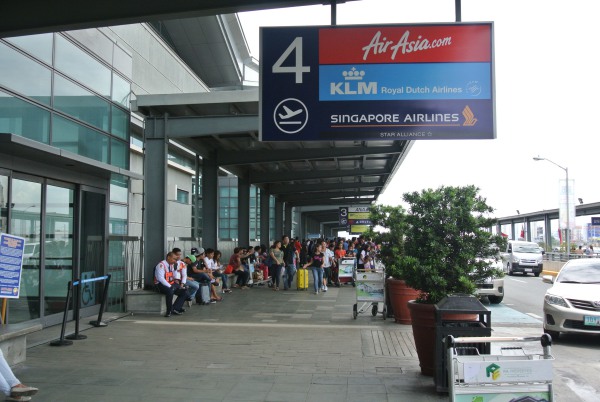 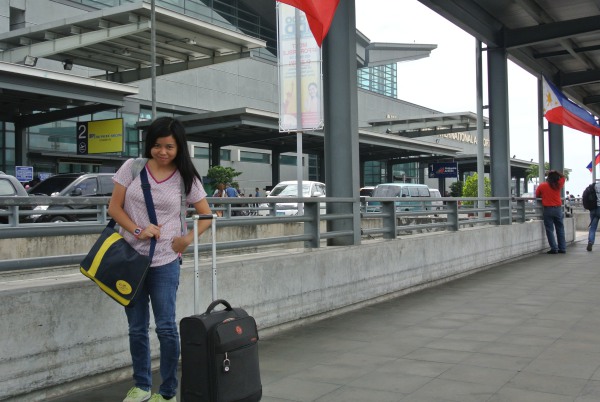 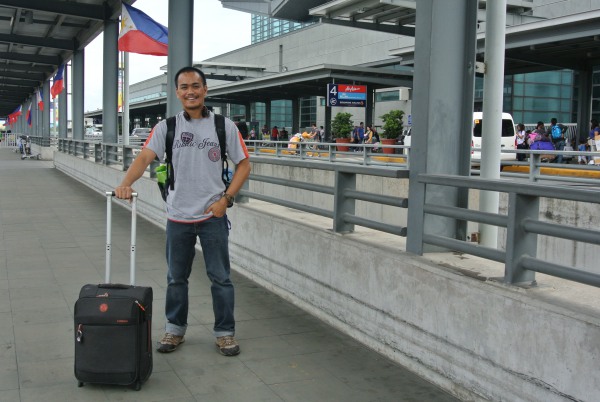 Before coming in, some picture taking of course. There is now a change in the entrance of people to the airport: almost all of the gates, except for the last are assigned to different airlines (in my case #4 is also for AirAsia passengers), and the last for non-passengers. Therefore, my sister had to use the latter. Coming in, I could observe that this is just a regular day, not many people but not too few. First and foremost, since I'm leaving the country, have to pay the crap international travel tax of PHP1,620 huhuhu. I would like to suggest that there should be an exemption for the first-timer overseas travelers hehe. 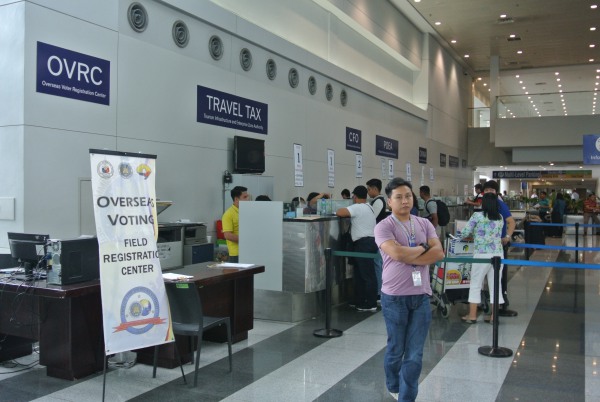 Travel tax, among other government services counters. There's also an overseas voter registration in connetion with next year's voting. 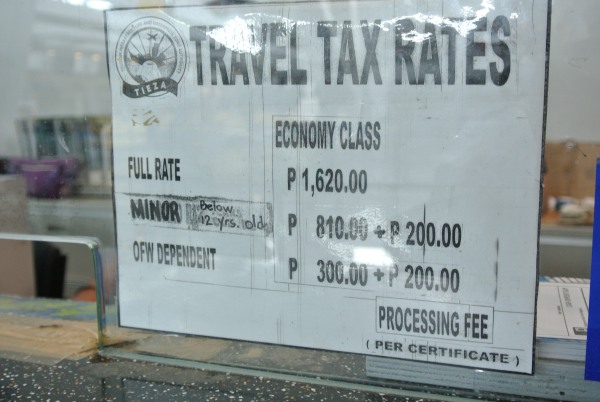 Philippine travel tax rates as of today. Processing fee even for certificates of exemption/reduced fee, gawd.

Coming in, I could observe that this is just a regular day, not many people but not too few. First and foremost, since I'm leaving the country, have to pay the crap international travel tax of PHP1,620 huhuhu. I would like to suggest that there should be an exemption for the first-timer overseas travelers hehe. After regretfully handing over such a big amount (and almost losing my documents because I left it somewhere near the counter after paying the tax - such nervous feelings), time to check-in. 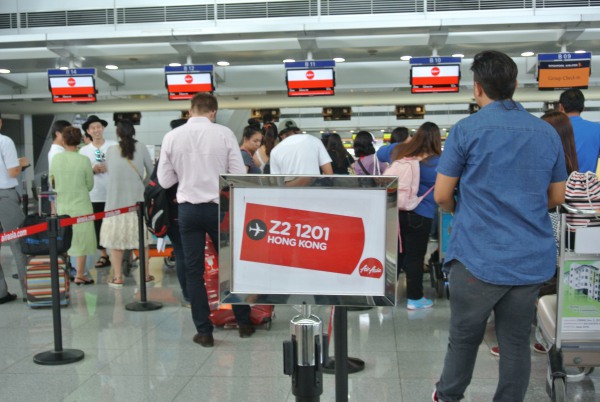 The process went on smoothly.  I do not have any baggage to check-in to save money. The counter guy did not bother to weigh my pieces of luggage even though they might seem heavy when looked at from afar, thanks to him, haha. Meanwhile, I can see that for Cebu Pacific passengers, the carry-ons were sealed with stickers to tamper-proof against post-weighing addition of luggage. Meh, AirAsia Zest seems generous at this point yet huh.

There's isn't much time left after finishing the check-in formalities, so my sister and I just roamed around: went down to the arrival area then up again to the right wing. Some more picture taking hehehe.... 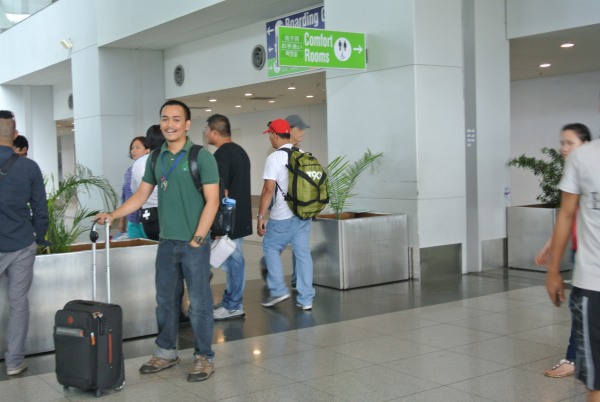 Just before entering the for-passengers only area, leading to pre-departure area. 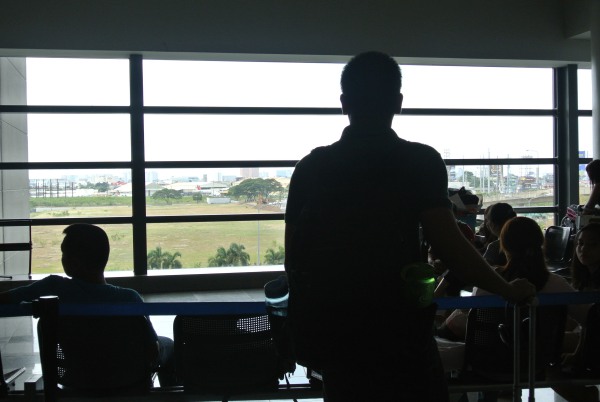 So, goodbyes to my sisteraka and entered the departure area! Finally, after all these years I have entered the international departures wooo. Not many people are lining up for the immigration counters yay! In fairness to these people, there are many dedicated counters for our overseas filipino workers (OFW). A young man maybe my age or a few years my senior, quite baby-faced for the job, spoke to me. I pleasantly said, "Hi, good afternoon!" and just handled my passport. Within a minute, without saying a word he handled it back and allowed me to pass - wooohooo, what a very good first time experience huh? Went for the second security screening and passed it and oh ho wooohoooooo I'm going out of the country now wooohoooo! 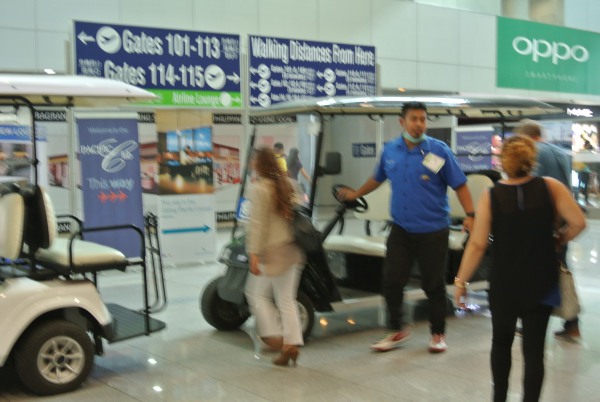 Nice, there are vehicles like these to ferry passengers who otherwise won't or can't bear the long walks to their gates 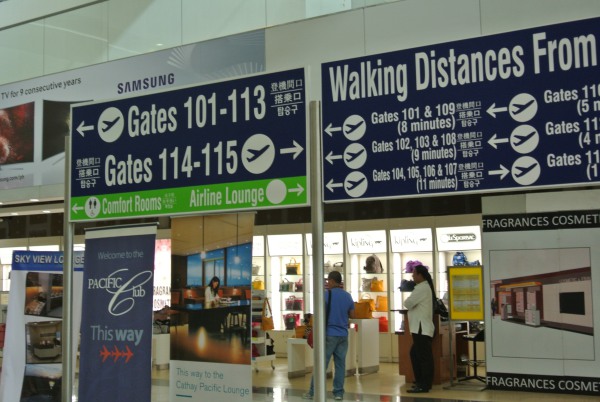 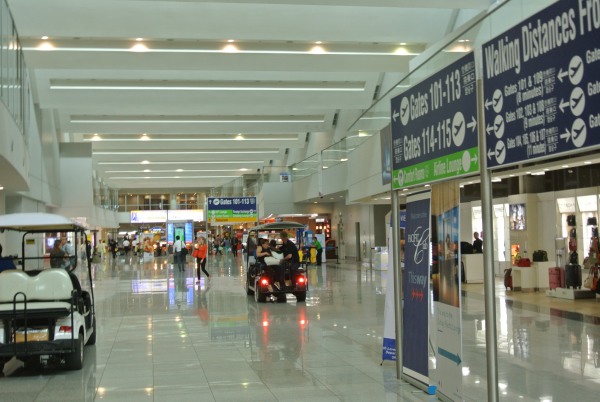 Finally entered this part of the airport!!!

And the walkathon begins! Pictures here and there for souvenir... 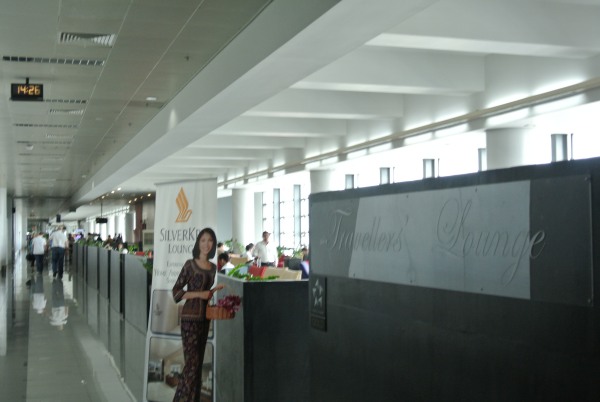 Singapore Airlines' SilverKris Lounge - now when can I ride on a full-service carrier? #HampaslupaProblems 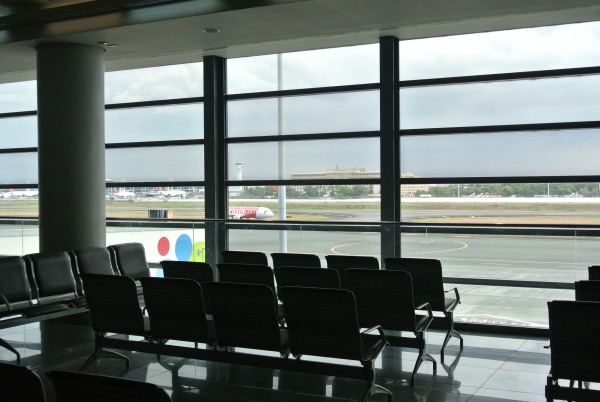 A vacant pre-departure section, with an AirAsia aircraft arriving (not our plane) 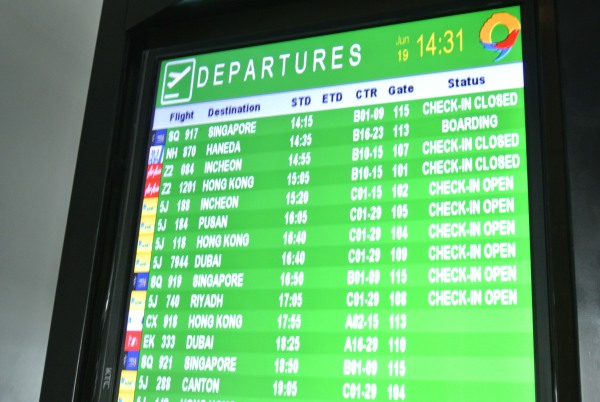 Flight departure information, my flight is at Gate 101. 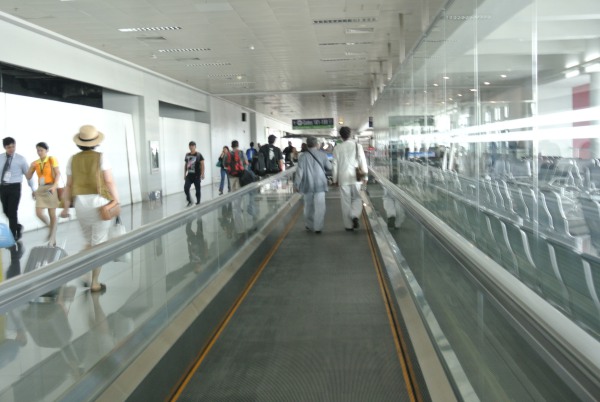 First time to try a walkalator: my, you indeed walk faster than usual . 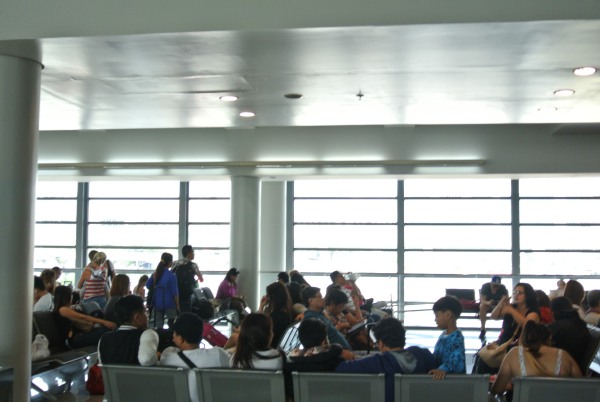 Passengers of Cebu Pacific bound for Dubai, hmm, with such many people this route really seems profitable. And speaks of our Filipino diaspora.

And after around 8-10 minutes of walking, finally reached the gate. The plane was there already. Of course, it took sometime before they told us to get on. AirAsia's system seem to be okay. 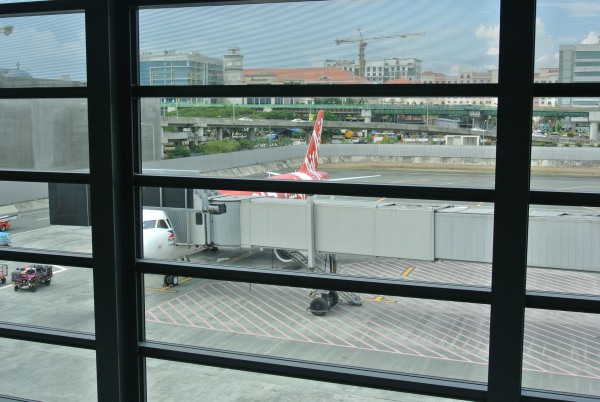 Our plane for Hong Kong. 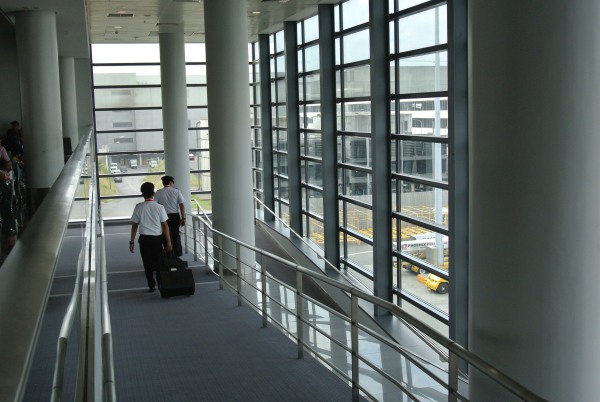 The pilots heading for the plane. Wee, I'll be like you guys in some years down the road. 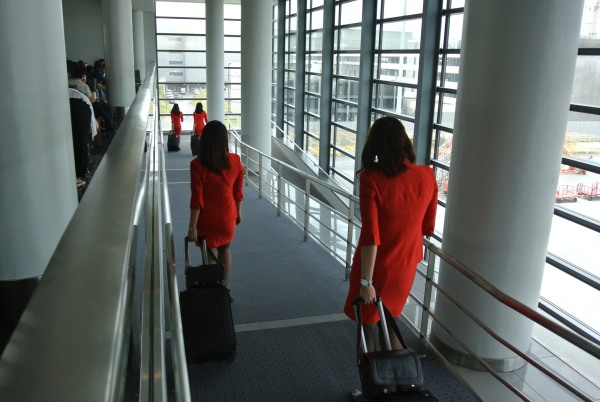 And of course, the ladies-in-red, the beautiful flight attendants !

And boom, it seems I made the wrong choice of window seat again. Jeez, my view won't be that great apparently. Also, the airconditioning seems to be not working to its fullest extent. Crew even have to apologize but said that as we will go up in altitude, cabin temperature will be colder. We eventually left around an hour delayed. Sigh. 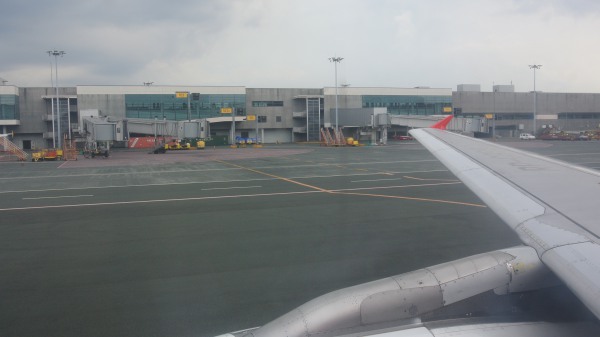 Pushed back and now taxiing to runway...

The flight was uneventful...

I have noticed that we did not dock at the main HKIA building. Turns out, it was the North Satellite Concourse - a hub for low-cost airlines. In this regard, Cebu Pacific wins over AirAsia. We must take note however that when 5J started flights to Hong Kong in 2001, it was still a full-service carrier (and I don't think the concept of a low-cost carrier at least in practice exists already at that time).

Have to take a selfies but tarmac manager or whatever he should be called, told us and other passengers to take pictures outside the boarding gate and tube.

The path for arrivees lead to a waiting gate for a shuttle bus to the main airport. People promptly boarded the buses, and it's my first time seeing left-hand drive in person, hello British influence.

Upon reaching main airport building, we used an escalator to ascend to the arrivals storey and there it was, the immigration counters. I wish I could have roamed the entirety of the arrival halls first.