So, it's an uneventful day today. Oh, I lost again my quite expensive umbrella that I bought just last Sunday. :/ 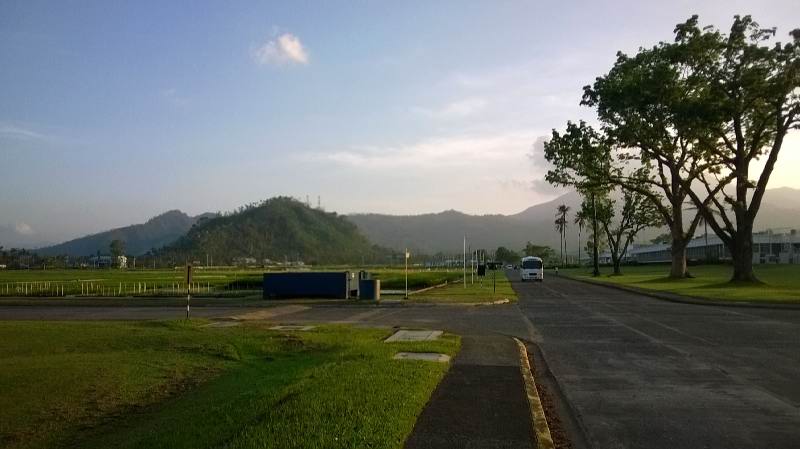 The weather has been good throughout the day, so some of my officemates decided to play volleyball. I went to the field around half of an hour later after they proceeded to there first. 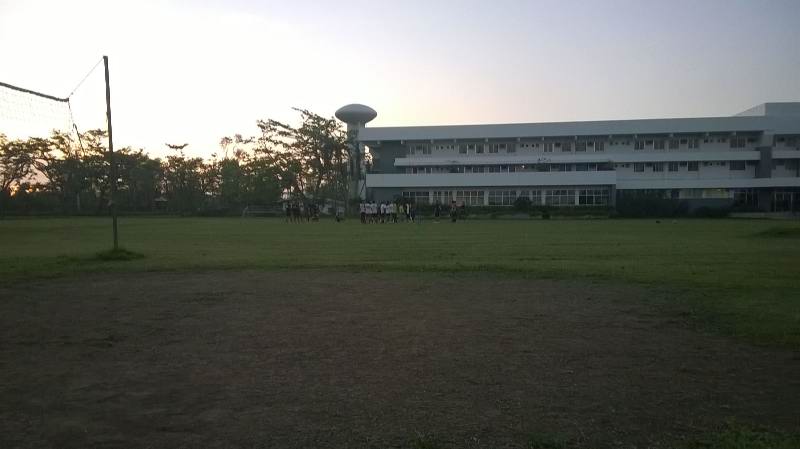 Freshly mown field. Ahhh, the smell of grass! And it seems there are so many football players today. As with us volleyballers, we're only few today since the others are on  official trip.

However, we cannot continue it through the dark up until the time permitted we are used to. The guards on duty just won't turn on the lighting system of the field because of an order from the Physical Plant Services (PPS). Along with Mr. Tonton Telosa
of TTC-GRC and Mr. Denis Diaz of CIO-ITS who were playing football, we tried to uhm, negotiate with the guards but well, as usual, they were just following orders. In the end, we the volleyballers, played until the level of darkness was as
such that we cannot continue to do so safely anymore. Time check, it's like 10 minutes before 1900H. Not bad. But I am still feeling quite annoyed.

Now, I have a dinner date with my ComSci batchmates who are now instructors at the UPLB Institute of Computer Science. We were meant to be meeting by 2000H but I'm already feeling hungry. So against my earlier decision, I joined fellow employees who opted
to dine at the nearby Mang Toto's Chicken Inasal. God, I did enjoy that pork belly liempo with rice, the fats and all - whatever happened to my bodybuilding plans. Is this cheat day, every day?

First dinner over. Then waited at McDo for the batchmates. Decided where to eat. Chubby Habbi's , at the Raymundo area. However, we were seated within just a few seconds when attendant says any of their chicken-based dishes stated on their menu
are not available. Kim then told us we should go to Seoul Kitchen instead. Well okay, though, I'm not getting impressive feedback of that establishment from my colleagues and acquaintances who already dined in there.

style="text-align:justify">So there we arrived. Place is quite cozy and really reflects modern restaurant architecture in South Korea. Its interior design is of the type I'm frequently seeing in those Korean drama shows. Tourist-intended materials such as maps, leaflets and even
an advert for former Korean Air Lines (now Korean Air) can be found displayed throughout. There's even one map that details Hongik University and nearby areas in Metropolitan Seoul under the glass of our table. And it's quite updated eh, published
date is just this January of the current year. It's not as formal as Bonitos or Mio Cucina (dined there last week) but the price I think is around 60-70% of the earlier ones. 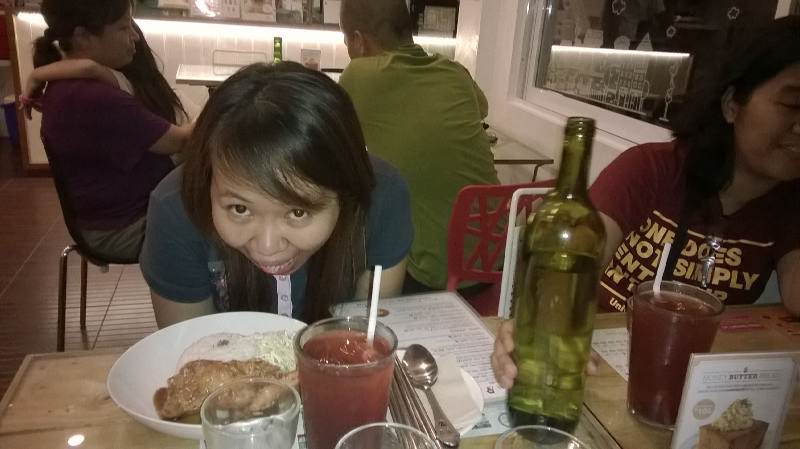 Our orders arrived quickly. Or I did not notice the time because I was so happy to be chatting with people that I deem of the same wavelength (ComSci peeps - well, back in IRRI campus, bla bla bla bla - you get the point). Hahahaha. 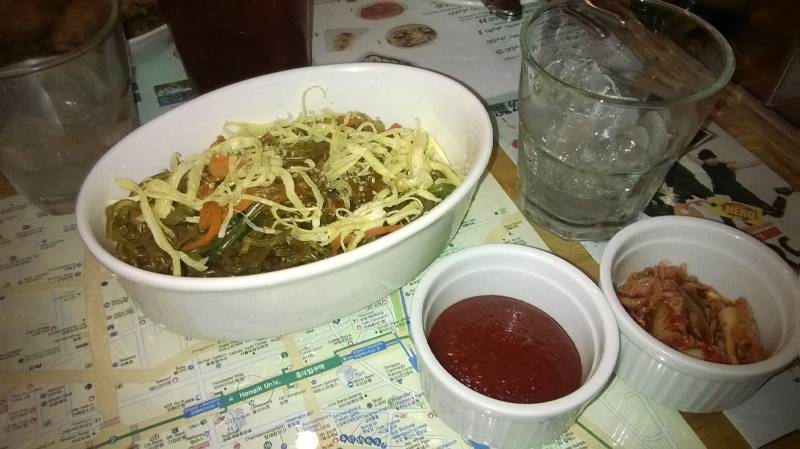 I ordered Japchae in addition to the main meal of Bibimbap, to share with them. The gochujang and kimchi comes with the Bibimbap. An extra saucer of gochujang costs PHP10. I got them to try this sauce and they loved it though it is quite spicy. 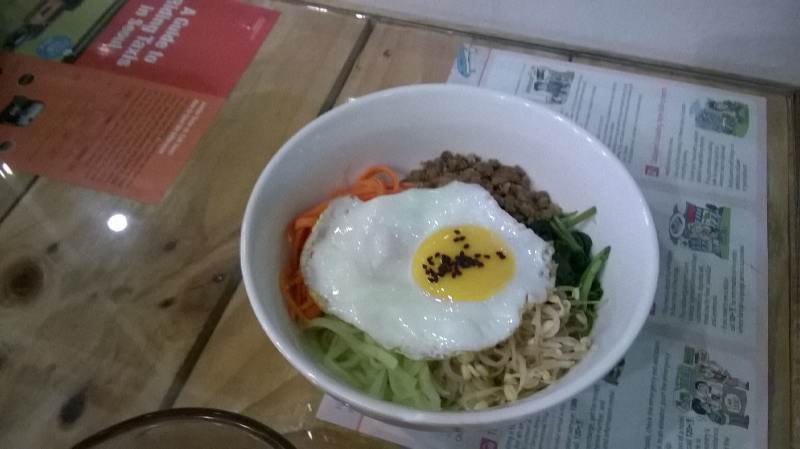 My main meal - Chicken Bibimbap (without "Soy" - there's a variant with one, and it's not the original Bibimbap I used to since they include Soy sauce or Soy oil, whatever, instead of gochujang). When I first dine at a Korean restaurant, I try out this dish first. It seems to be my litmus test for how Korean really is that particular restaurant. For this one, they used green papaya as one of the ingredients. I've never tried that but anyway, it seems I did not taste it anyway. 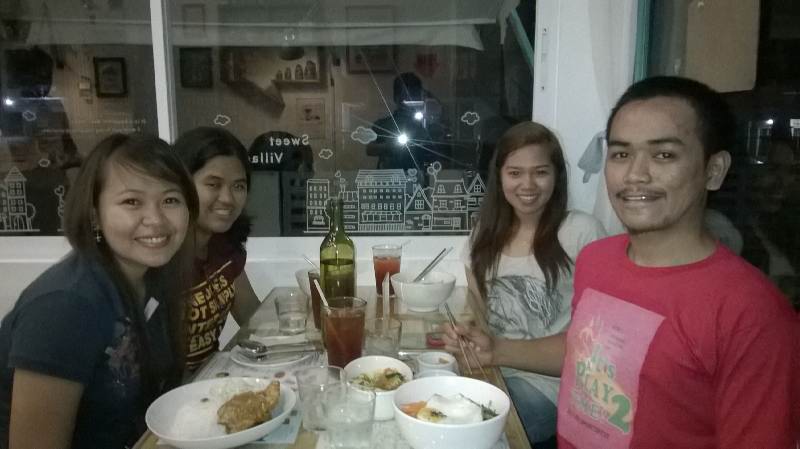 The customary group picture before feasting.

And here we are, chatting over many topics as we dine. For example, their lives while teaching, their students' behavior as well as those of fellow instructors. News about our other batchmates also come into the limelight from time to time. As
for me, I did not have, or was not able to share much.

As for the verdict over the foods (I have ordered), okay, here they are. The bibimbap, I think it's okay, not that extraordinary nor the one you'll be craving for. The japchae is
either not lacking moist or its noodles were not cooked enough to my liking. Well, I'm not sure if that's really how it should be cooked as this is my second time tasting such dish and the first time was (and I liked) from the mass-produced
Mr. Kimbop at SM City Calamba. Oh, I should commend their Kimchi - Maria seconded that their kimchi is more delicious than those sold in bottles at supermarkets.

We left beyond 2100H which was their closing time, being carried away in our conversations. Also, why did I not speak to the apparent owners of the establishment when we were leaving as they were waiting outside? Kim says they are a couple, the
guy was expressing thanks for patronizing them and I said I should have conversed with them in Korean... she says the girl is the one that is such. Oh. Well much better.

Kim asked if we would like to continue chatting in their flat at White House Apartments. I and Maria okayed. It turns out Tin and her are now housemates, with the latter finally moving out of unit H-1 after occupying it for five years now. And
more information outflow. Hahaha. From Kim's boyfriend, ex-boyfriend, would-have-been boyfriend (hahaha!) then some of their colleagues' behaviors to the atheism of one of their students whom I am friends with and somewhat share that student's
sentiment, we talked like there's no tomorrow.

On the way home, after waiting for a few minutes there was finally a jeep. Aboard were international students whom I presume
are fellow Southeast Asians since I saw this one particular guy that I always see playing volleyball in the UPLB Freedom Park and College of Agriculture grounds.