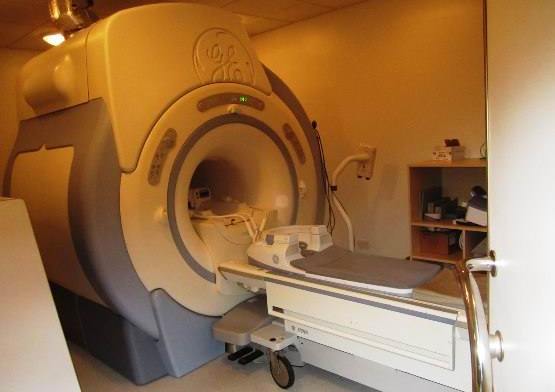 A GE MRI machine, similar to what AHMC has. Photo sourced from Greg Lance-Watkins at http://greglw.blogspot.com/1971/01/item-04-mri-scanner-magnetic-resonance.html, retriev 22JAN2016.

... , my arm injury still hurts. Therefore, it's high time that I deem I seek invasive procedures now. For most of the week, I was away from work to consult an orthopaedic as suggested by my supervisor back in our Christmas Party in December. It was among my to-do lists upon coming back to work, however, many things piled up, including our Heirloom Rice Activity and therefore, it was relegated to the low-priority lists. But it cannot remain that way for long as I was hearing a session in our Science Week last Monday, just before my boss is about to speak, the pain suddenly came out of nowhere and it is quite excruciating. I wondered how could I have still managed to drive around during the past few days.
Thankfully, some mefenamic acid still left somewhere in my house could mitigate the pain. Of course, I know this is not a good practice so last Tuesday I practically suggested to Doctor Jose Rafael Resubal that I be considered for Magnetic Resonance Imaging (MRI). Long story short, here I am at Asian Hospital and Medical Center to undergo that.

I arrived around 10 minutes before 1400H, my scheduled appointment time. The inviting and inspiring facade, airport-like feeling in combination with my backpack trolley just makes me happy to be going here (when in the back of my mind, I think I shouldn't be). Since I think MRI does not fall under the outpatient services which I used to go for during my previous visits, I have to ask the information counter on where to go and they politely pointed out to the Radiology section which was a few steps away and just beside the International Health Services (IHS) office which hosts the ever-friendly staff that attends to my, or rather IRRI staff emails regarding our visits.

As usual, bureaucracies on checking my scheduled appointment and proceeding first to the cashier for billing settlement with Cigna transpired. However, there are two additional steps this time: an apparent radiologist was called first to somewhat verify what I'm feeling and where exactly the MRI is to be done, and, filling out a two-page questionnaire regarding the procedure I'm about to go. If you are curious about it and since an anonymous call to Asian three days ago stated this, my cost for this "plain" MRI procedure is around PHP 14,800.00. Submitted the form and I'm in for a queue. Minutes later I was called to be next in the queue, only to be told to go back to the waiting lobby/lounge. Apparently, some old male patient who's in a stretcher is ahead of me. Thirty minutes later of internet browsing, I noticed the man was being whisked away by staff and I was called for my turn.

In preparation, the technician/staff oriented me on what we are to do. First and foremost, he told me to remove all metals from within my body (watch, belts, coins), put my valuables in a locker. I had to remove the laptop in the trolley and stow it along with the wallet, phone, watch and bluetooth headset in the locker, and in we went to the MRI chamber. It's a pity I cannot take a picture as I have put the phone in the locker as mentioned and there's a big sign prohibiting entry of electronic devices to there. I'm too shy to take a picture after the procedure anyways and I'm not sure if that is even allowed. I did not bother to ask.

Upon entering the room containing the machine, he again quizzed me on which part is painful due to my injury. I explained that it was due to wrong landing using the left elbow when playing volleyball back in September - all of my body weight fell on the elbow plus the scapular area. Almost removing my shirt, I pinpointed the area hurting and he I presumed he applied some sort of substance that will serve as a guide for the imaging process. He then directed me to remove my shoes and lie carefully on the bed-like structure that will take me within the machine. My hands were placed behind my back as if I am exhibiting the surrender sign, he placed earplugs in my ears as well as a sort of emergency button - structure is like a turumpo but texture is like that of a stress ball. He explains that if I really feel discomfort, dizzy and/or just want to stop the session, squeeze the thing so their attention will be called. Finally, he asked me if I have any (other) questions to which I replied/asked, "How long would this take?". He answered, around 25-30 minutes which was just coinciding with my wait for the male patient's turn earlier.

The "bed" is then moved forward, elevated, and I was inserted into the machine "slot". During these moments, I had so many realizations, ranging from empathy towards people who regularly undergo this like cancer patients, to exaggerated feels of me being pushed into a cremation chamber...

Inside, preliminary feel was it might quite be triggering someone's claustrophobia but thankfully I don't have that. There is a non-disturbing illumination and one or two chambers or whatever being hidden or kept secure in place by screws. The color of the materials and illumination feels like late 80s/90s - the yellowish and grayish color mood. For the next 20-30 minutes, I have to stay lying in here like I am some helpless disabled person.

True to what I have read, it was indeed a very noisy experience, that's why earplugs are needed. At first, the sounds were simple resembling the noise of a diesel generator and/or a concrete pavement drilling tool with just one pattern or rhythm. As the session went on, various more sounds/pattern/rhythms are heard. Most of the time, it feels like a part of the machine was bombarding my left scapular area, the target of the request for this imaging diagnostic. I did feel that the part was responding, like, it's beating like my heart. Maybe it was just because of the the resulting numbness/stinging sensation all over my body as a side effect, but I do feel that there seems to be some sort of RNB-bordering rhythmic pattern in the way these annoying sounds are generated. Whoosh. A few variations, with around 30-60 seconds interruption between the active parts of the session proper went on.

When it was finished, staff told me so, so I can compose myself for "extraction" from inside the machine. The reverse of the insertion was performed, slowly but surely, the bed was being pushed out. I was even eager to get out while it is still not being lowered down and technician had to remind me to keep calm, all the while, I feel like my whole body is borderline on being numb/having cramps. Afterwards, procedure indeed took 30 minutes, give or take 3-5 as verified upon looking in my clock. Tech inferred from my shirt (wow, company ambassador? I don't think so, I won't fit that position. Hahaha!) that I work at IRRI and chit-chatted me about it by asking about if seeds for dry season are being distributed now - to which I explained yes, but not only now, rice seeds against drought are being continously bred/developed/enhanced and distributed as constraints evolve too or new ones crop up, for example climate change. To showcase an example, I told him about the salt-tolerant rice which was the brainchild of just retired Director-General Robert S. Zeigler as well as the for-release Philippine version of Sub-1. Responding to a clamor for more expounding on the matter of where the sources (could be 'parents' in Biology speak?) of these come from, is that, from what I understand, two rice varieties exhibiting salt and drought tolerance where identified, gene isolated and therefore it was bred with the preferred varieties in the country for target distribution, like Bangladesh, India and the Philippines. We just can't breed varieties because of course there are a lot of things to be considered, like preference of farmers' and rice eaters in general about taste, texturing and cooking quality, among others. (In one of our post-game chats, a playmate who is an Assistant Scientist remarked that perhaps the Social Sciences Division is one of the underappreciated departments in IRRI because breeders and/or higher-ups should just not breed rice: i.e., what use is your <insert stress here>-tolerant variety if farmers cannot eat them? SSD usually takes care of these things as from what I understand, they do a lot of surveys catering to these concerns. Of course, that is not what they only do.) Niceties and goodbyes were said, with him answering my question, that results would be available only tomorrow, at around 0900H. I really hope I won't come under fire for speaking about this and/or violating our "Guideline for IRRI Staff Making Public Comments" manual. Hehehe. Well, I think the tech is not a media person so I doubt it is essential that I refer him to the relevant authorities (i.e. the DDG-CP or ER) for more inquiries. T__T

Therefore I have to have really a sleep over with relatives nearby.
Oh, P.S.: I had to stay at the radiology lobby for almost half an hour more as I really felt tired after the session.
Oh P.S pa more: The Belgian hazelnut + bananan waffle and milk tea, costing PHP 55+35 were really delicious, though I'm not sure if satiateing. But then, for someone in dire straits noawadays (and general public), that is quite expensive, huhuhuhu.