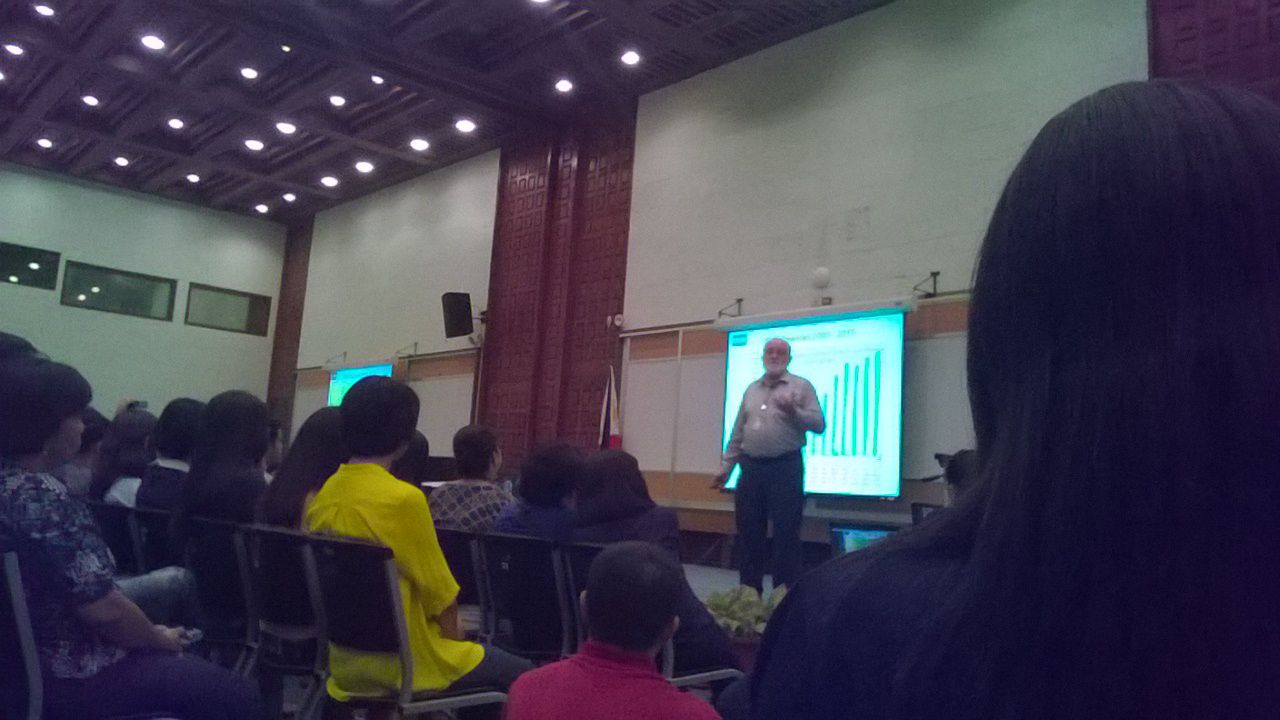 In line with the Human Resource Services' email last week, today, the Director-General, Dr. Robert S. Zeigler is addressing all IRRI staff, because of budget cuts, funding, things like that.

But first, let me take a selfie. Hehe, actually, just before the meeting/conference, I was speaking to a recruiter. I'm applying for a job as a Perl Developer somewhere in Alabang. I feel kinda uneasy.

Anyway, the room is jampacked as usual when he speaks. Good thing I proceeded to the Umali Conference Hall right after speaking to the recruiter, I was able to have a seat - as I was seeing during the call that many staff were already going even if it was 1435H still (event starts at 1500). However, the mood is tense, as for we all know, it's all about the budget and IRRI employees' future in general, recalling the email the DG sent to us back in March and early in the morning.

So there, yes, here he is, reporting on the budget situation and what were the minutes of the meeting of the Board of Trustees in India. The main issue was, from a forecast of more than US$40 million back in October 2013 then around $32M nearing end of 2014, the apparent final amount released to IRRI from the Consultative Group on International Agricultural Research (CGIAR) was now down to around $26M. The point is, looks like they have allocated and/or spent more than that already before the drastic cut announcement, so there is (some?) deficit now. The DG was also more frank and blunt than his previous presentations like this, even stating something to the effect of "Marginally competent (financial?) people in the CGIAR". Does that sound of exhaustion or frustration?

That being said, there would be so many changes but he did not get into the low level details. Among the things I have remembered are, we will have a new healthcare provider, some bonuses were cancelled (for all we care at C4 now since we're only until November so far), merit increases for basic pay fixed to a flat rate of 3% ( formerly it depends on your (department's?) performance, can go high as more than 5%), and we'll gonna do some sort of the Philippine government's infamous Disbursement Acceleration Program (DAP). In that last thing, as I understand it, he wants funds that are that are not being used as budgeted under a certain research program (because the research is slow or needs other action to get moving?) are moved/realigned to another research program - and not merely funds, personnel too ( did he mention assets too?). Wait, is there some sort of redundancy (read: retrenchment) upcoming? I'm not sure, but he was saying that he doesn't want a repeat of the early 2000s retrenchment activities here ( that must be bloody, I concluded upon gauging his voice and movements when he was saying that ).

Yes, that man in the picture in the project is Bill Gates. Sorry, my phone's front cam is not that good (can't use the back cam as it's damaged).

Oh well, he also "admitted" to us that Bill Gates indeed came to IRRI, with some pictures to boot. Too bad, they are still not releasing their photos publicly. I hope I won't be called for posting my photo of this (there's no instruction to not take photos time eh?).